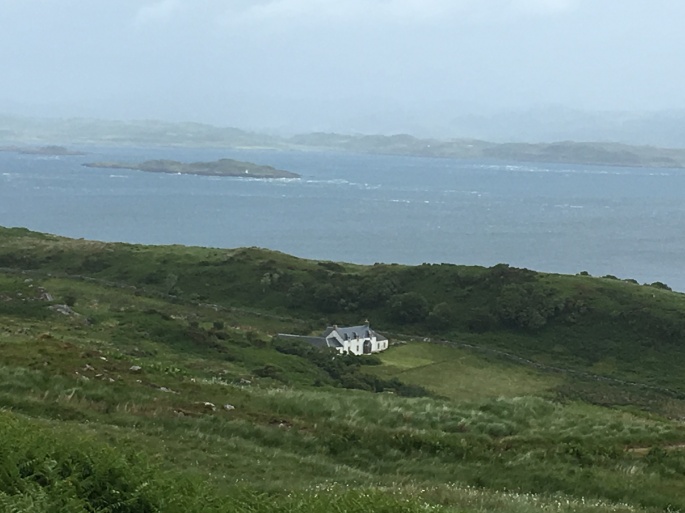 Just because I don’t have a god doesn’t mean I can’t do pilgrimages.

I make them to my old neighbourhood in Salford, Lancashire. I did one to be photographed in the real Coronation Street in front of the Salford Lads Club for a Manchester photography exhibition. I spent a whole hot afternoon walking around Berlin to track down the flat Bowie lived in with Iggy Pop in the Turkish Quarter. I made one recently, by plane, car, ferry and foot, to the Isle of Jura in the South Hebrides to find the house George Orwell lived in while writing 1984.

I’ve wanted to visit Jura for over twenty years, but children, intensive workload and other stuff got in the way. The more I read about Jura – just two hundred full-time residents, one road (which only runs half way round the island), one hotel, one shop, a whisky distillery, a couple of mountains, six thousand red deer and an unspecified number of feral goats – the more I wanted to visit what must be one of our last remaining wildernesses in the UK.

Then I read about Orwell’s time there. He has been one of my literary heroes since my early teens and just recently we covered his realist non-fiction (Homage to Catalonia, Down and Out in London and Paris) on my creative writing Masters degree. The idea of seeing the wildly remote house that he wrote one of my all-time favourite novels in, on the wild and remote island I had longed to visit, was irresistible.

The prompt to come was a conversation with my old boss, the founder of my former PR agency Shandwick, the Tory peer Lord (Peter) Chadlington, whose advice I sought when I announced my early retirement. He told me that he had taken himself off to a remote part of Scotland to think about the rest of his life.

The rest of my life was already in motion. I had three young boys at home I wanted to raise as a full-time dad and help them on their way in the world, and my ambition to write had led me to sign up for my two-year part-time MA at Winchester University. But I liked the idea anyway. It was almost a year later that I actually got to finish working, business travelling and commuting, CEO retirements tending to be like Jane Austen novel engagements; going on far too long while you wait to start your next chapter and your successors wait to get the keys to your corner office.

So, in early June I left the family at home – the kids would have hated the dodgy WiFi and unlike me my wife is no fan of lonely wildernesses – and flew to Glasgow. Then I drove two and a half hours past Loch Lomond, Loch Fyne and Inverary to the two hour CalMac ferry crossing of the Mull of Kyntire to Islay. Finally, a little ferry on to Jura.

I stayed at the only hotel, The Jura Hotel (great food, locally sourced, and a fantastic view over the sea to The Little Islands and the self-explanatory Goat Island) where my snug little room overlooked the Jura Whiskey Distillery. Jura’s one “main” road, a single track frequently potholed affair that skirts around to south of the island and up to the north east. It runs out four miles before Barnhill, the isolated and basic farmhouse where Orwell lived in the late nineteen forties for much of the last few years of his life.

Compared to the sun baking Sussex, the weather forecast looked grim for my few days on the island and the morning of my first full day carried warnings of hard winds and rainstorms. But when I set off for my trek up the north east of the island the sky and sea turned blue.

A keen single malt drinker, I was already familiar with and a fan of Jura Whiskey. But lately I had got into small batch gin in a big way, even experimenting with my own with botanicals from the South Downs and nearby beaches where I live. I had read about Lussa Gin, made by three local women (no Hackney bearded hipsters thanks very much) in a remote farm outhouse in Ardlussa on the road to Barnhill. Orwell, wilderness, walking and a new gin distillery to check out. Sounded like my perfect day. And it was.

So I drove nineteen miles of single track, pot-holey road past stunning views of the water over to the mainland on one side and the prosaically named Paps of Jura mountains on the other. I crossed the fast-flowing Lussa River where the gin distillery draws its spring water from and met Claire Fletcher, one of the three intrepid women behind Lussa Gin. She showed me the gleaming little copper stills where the magic is worked, including “Jim” the small original still, in a room half the size of my living room but where they produced 10,000 bottles last year.

The botanicals are all sourced locally, either from the wild (lemon thyme, lemon balm, sea lettuce, juniper berries from the West Coast that they have to fight the deer for) or grown in their gardens. Maybe it was the connection of seeing the setting in which it is made, where the botanicals are foraged, smelling them picked and ready to go, but my first taste made me think it the subtle essence of this wild and beautiful island in a glass.

Claire Fletcher, who along with Georgina Kitching and Alicia MacInnes are the intrepid women behind the award-winning Lussa Gin. Claire was a music producer who met her husband when she visited the island in the 90’s to help make a video of the KLF Foundation and their infamous ‘burn a million quid’ stunt – which for some reason they chose to do in a remote boathouse on Jura.

A bottle in the trunk, I drove a further three miles of increasingly potholed road until a sign told me the public road had ended and I should abandon my car for what my grandad called Shank’s Pony. Another sign told me that Barnhill was four miles walk further on. 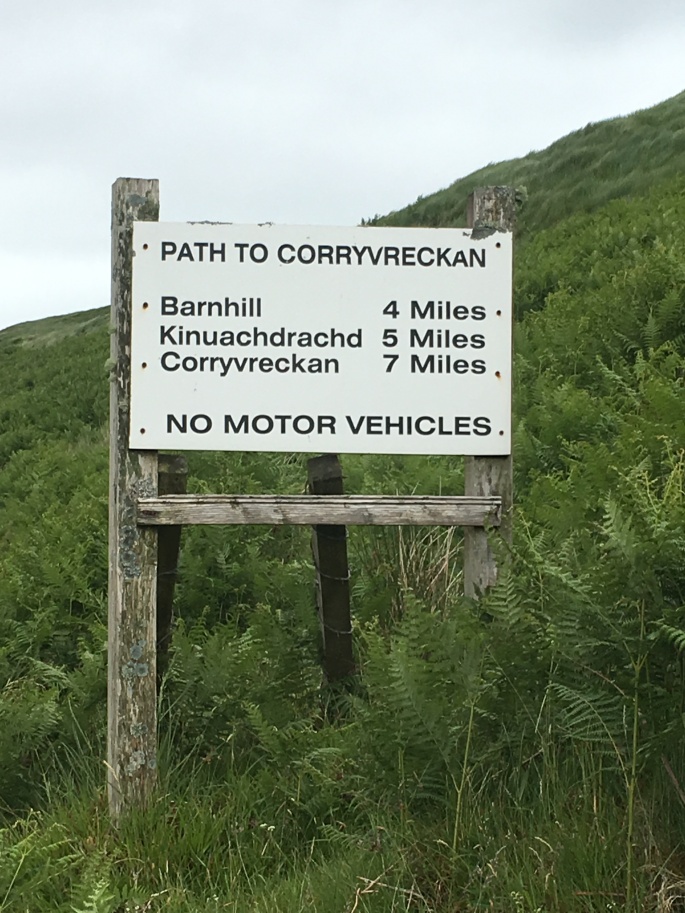 And what a four mile walk. I didn’t see a single human soul in the three hour round trip, just fabulous views of the sea on one side and hills and plains on the other. After an hour or so, a white house appeared far away, below on the right down where the land met the sea: Barnhill. I tried to imagine what Orwell must have felt when he saw the wild beauty and isolation.

Orwell first showed an interest in visiting Jura with his wife as early as 1944. He corresponded with the man who then owned Ardlussa, where the gin is now smithed, and returned to his plans in 1945. They had to be put on hold as his wife needed an operation, a hysterectomy. The next letter to Ardlussa reported that his wife Eileen had tragically died in surgery.

In April 1946 Orwell finally arrived at Ardlussa via the post van after a 24 hour trip (mine took 11 ½ hours) on his own. The next day the people who were to be his next-door neighbours, albeit six tough going miles away, a Mr and Mrs Nelson, took him up to look at Barnhill.

Barnhill was an abandoned farmhouse with the most basic amenities. Orwell, known locally by his real name Eric Blair, set up home with a camp bed, table, a few chairs and a cooking fire. The Nelsons offered to help with food supplies, which were still strictly rationed, but he preferred to look after himself. He planted fruit trees, grew vegetables and took his boat out fishing for food almost every night. The privations that come across so acutely in the novel must have been even more real writing in remote Barnhill than in post-war London.

But, while still grieving Eileen, Orwell was happier there than in London. He wrote, ‘I am anxious to get out of London for my own sake because I am constantly smothered under journalism. I want to write another book which is impossible unless I can get six months quiet…somewhere where I cannot be telephoned to.’ That book, working title The Last Man in Europe, became 1984.

In time he was joined by his adopted son Richard, then aged three, his housekeeper Susan Watson and his sister Avril. He spent most of 1946 there writing 1984. He loved to take the boat out on the sea, writing in one of his letters from Barnhill of ‘the completely uninhabited bays where there is beautiful white sand and clear water with seals swimming’. (Still the case.) It was on one of these trips through the Gulf of Corryvreckan that he got into difficulties in the notorious whirlpool off Jura’s northern coast. The motor was ripped from the boat which overturned. He managed to rescue his little son and, along with his visiting niece and nephew, make it to a little island from where they were picked up hours later by a passing fishing boat.

Orwell returned to Barnhill in 1947, where his long-standing lung problems got worse and he was taken to East Kilbride just outside Glasgow and diagnosed with TB. Despite this, or perhaps because of it, he returned again in 1948 determined to finish the novel. Mrs Nelson recalls hearing him typing in his bedroom above the spartan kitchen, typewriter perched on his knees. By this time he had given up his rented cottage in Hertfordshire and his London flat, intending to make Barnhill his permanent home. It was short lived. 1984 was published in the summer of 1949 and the following January he was dead, aged just 46. 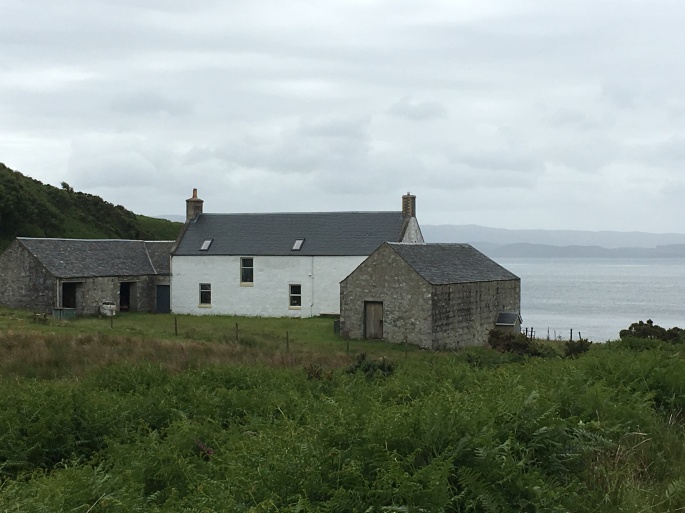 Barnhill, where you can unleash your inner Orwell for £1000 a week. But forget WiFi and Ocado deliveries.

Barnhill is little changed today from the summers Orwell spent there writing, farming and fishing. You can rent the place for £1000 a week but, as then, it has few mod cons. A generator powers the lights but little else. There’s a gas fridge and coal fired Rayburn for hot water. You need a 4×4 or boat to get there, unless you fancy carrying your luggage all four miles that I trekked in wind and rain. But there’s the wilderness and solitude and seclusion that so inspired Orwell during the last few years of his too short life. 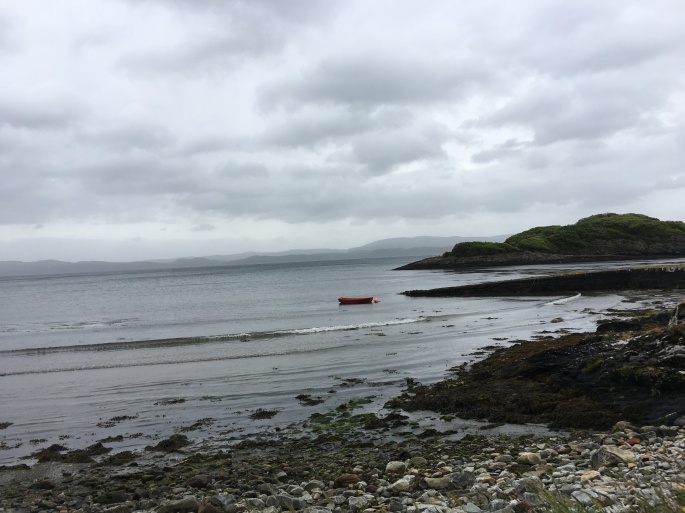